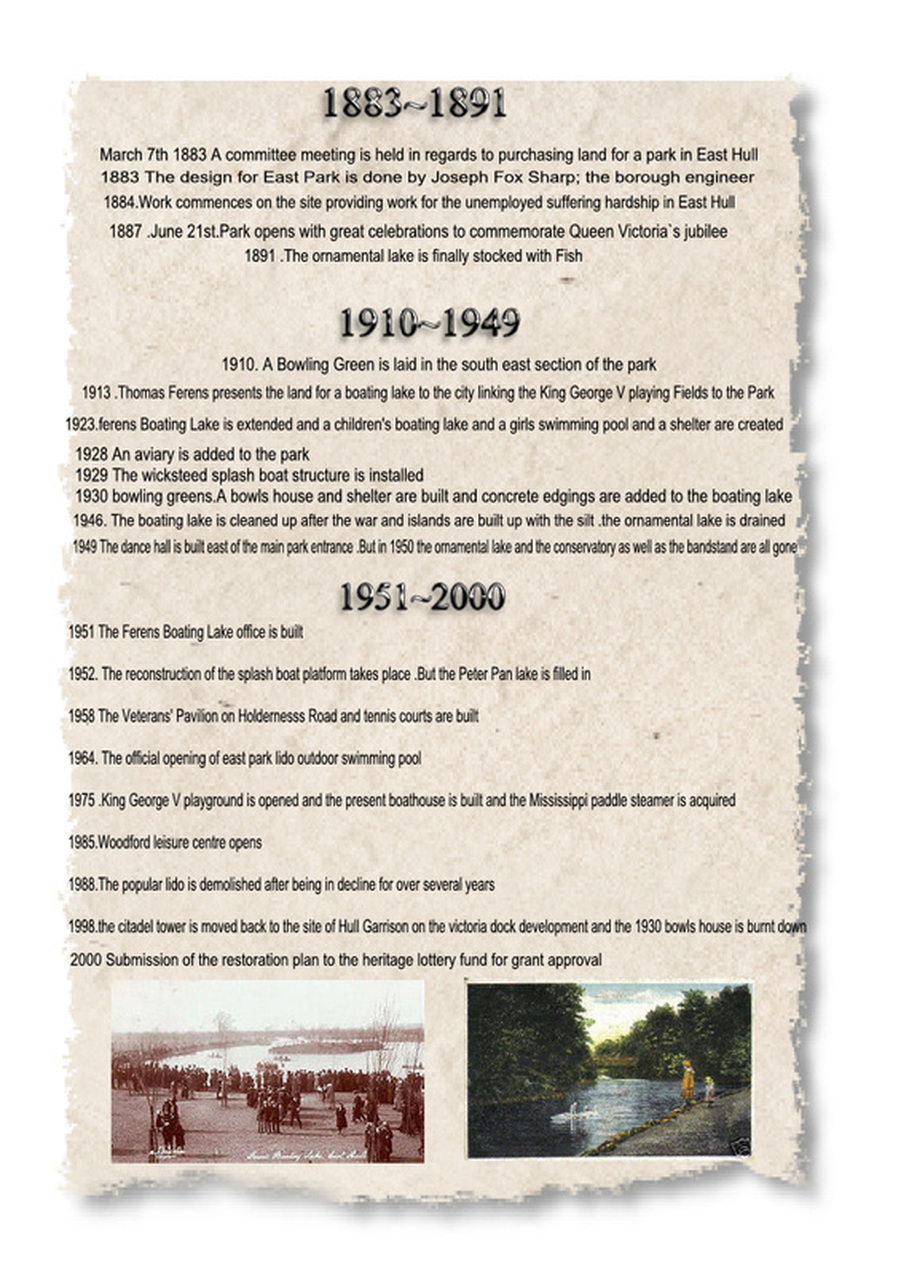 East Park is one of four original Victorian parks in the city the others being Pickering/Pearson/West park. The western half of the park was opened to the public on the day of Queen Victoria's Golden Jubilee 21st June 1887.This part of the park was designed by Joseph Fox Sharpe the borough engineer and covered an area of 52 acres.Sharpe's design echoed that of Pearson park the intention being that land adjoining the perimeter carriage drive should be developed for housing.

This did not happen. however sharps carriage drive still survives to this day as does his model boating pond and central avenue/Broadwalk.In addition the rock work known as the Khyber Pass designed by E.A Peak still proves popular with all ages. the citadel tower though was removed and now resides not far from its original site at the citadel prison which was located at Sammy's point and which is occupied now by the DEEP. The tower is located near to the shops on Victoria dock village.

Lost features ii the park include a small serpentine lake in filled in the 1950s and the main entrance gates opposite telford street on Holderness rd.which was replaced with a concrete gateway in 1964.Between the end of the edwardian period and the start of the of the 1930s the park gradually extended eastwards to occupy a triangle area of land more or less equivalent with its present boundries.The new land bounded on the north by summergangs dyke and on the south by Holderness rd took in the King George V playing Fields and a series of old clay pits. Which were associated with the many brick and tile works in the area. Surviving park features from that era include the Ferens Boating Lake established on land donated by T.R Ferens in 1913 and extended in 1923. also a double arched bridge with decorative balustrades' built in 1925 and a rare 1929 wicksteed water chute listed Grade II status.

2002-2006 winter works begin on the restoration project.including a new children's play area and star gardens revamp as is the the original goldfish pond in the sunken Gardens . also the stone bridge which was covered near to the old aviary is restored with a new path entering the sunken gardens. Most of the pathways around the park are renewed and new ones put in.Also new bins are situated around the park and the car parking on the front of the lake is pedestrianized. the bridge over the lake is restored after years of vandalism.also the model yacht pond is refurbished and has a new car park.work is carried out on ferens boating lake. work to part rebuild the old boathouse begins.with the inclusion of long awaited public toilets.the splash boat is also renovated to include a new loading area for passengers at the bottom of the building.a CCTV system is installed . A new pavilion building including cafe and offices is erected as is the new animal education centre.Plus work carries on with the other works to be done under the refurbishment.

The grand opening takes place on 19th June 2006 by rt hon John Prescott MP. The animal education centre is opened by Kim Wilde.Special Medallions are given out to local people to commemorate the occasion.2007.The Lord Mayors Parade and gala is cancelled due to the flooding of the city.work still continues on the site.But media coverage of the refurbishment and work that has failed to be completed by contractors.brings a halt to works.In May the East Park piczo website is launched   to help promote events ect at the park.East Park being the only park in hull to have its own dedicated website.
Oct 2007 the very first East Park Calendar is launched photos on the calendar being taken by staff members.Later in the year East Park is voted pride of place winner in a national competition.The 3rd Halloween fright night event is a big success yet again attracting thousands of visitors and being broadcast on the ITV and BBC stations.
2008 work starts on the new water play park hopefully ready for the summer holidays 2008 also new park entrance sign erected at the front gates.
The new east Park manager is in post from April.New fencing around plant areas in the star gardens and also new gravel paths laid around the park.July and East Park gets its first Green Flag award.
Fright night 3 is another success and park goes from strength to strength.
2009.the new water play area is officially opened for the summer and some new swan pedalos are purchased for the summer.The new mobility scheme is rolled out and a new disabled cycling scheme is launched.The 4th fright night event is a huge success with calls to extend the spooky walk.
2010 sees repairs to the gravel pathways and the installation of life saving equipment around the lake. also a new outdoor gym area to the front of the pavillion and the park remains a green flag award winner. The splash boat is damaged and is put out of action for the rest of the summer.
2011 a small extension to the play equipment is made with the emphasis on disabled users.The park keeps its green flag award status and the cycle scheme goes from strength to strength.work is completed on the walkway to the east side of the lake but it is found  that is not to specification and safety issues are raised so it was closed.
2012 /2013
The water chute is sent off for repair and a new working system is planned for a safer working area for maintenance procedures.Controversial plans for dog control in the park are brought to a head with a dog survey done to get public opinion.
4 mini shire ponies are bought for the animal education centre as an added attraction.
People counters are added to the park entrances this will help get a better idea of user numbers and traffic management and future funding.
A re- design of the pavilion ponds is submitted for approval.
New benches are located in the water play and are designed to accommodate wheelchairs and a small fence is erected to the frontage of the lake.
The water chute reopens for the jubilee weekend with large crowds taking advantage of the weather.
East Park keeps its green flag status again..
The summer of 2013 is one of the hottest on record with record visitor numbers around 3 million and the usual events such as vetrans weekend being packed out but problems with the filter system in the pool end up closing it for the rest of the summer hols.
The pools at the pavillion get a refurb with fountains and  new bases put in. and also the ability bike scheme goes from strength to strength with  the doubling of members to the scheme around 500 groups and individuals. 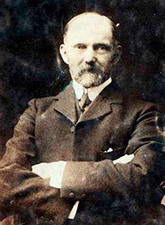 Thomas Robinson Ferens was born on the 4th May 1847 in a small village called East Thickley.He was one of seven children and his father George Waller Ferens was a flour miller.He attended Bishop Auckland private school he found employment as a clerk.
He married Ester Field a wealthy merchants daughter in 1873.Ferens joined Reckitt & Son in 1868.He moved swiftly through the managerial ranks and became works manager in 1879 and went on to become a member of the board in 1888. In 1894 he became a justice of the peace.He was made a freeman of the city of Hull in 1911.
Ferens entered politics in 1906 as a member of Parliament as a liberal member representing East Hull.In 1912 he was appointed to the privy council by King George V and also became the high steward of Hull in the same year.He presented a petition in favor of women's rights in the house in 1910.
Ferens was a lifelong teetotaler and from the time he started earning a salary he allocated 10percent of his income to charity.Ferens donated land adjacent to east park for the building of a boating lake in 1912 and the lake was opened in 1914.The lake remains today as the Ferens Boating Lake but the old wooden boats are long gone.Ferens lived at Holderness House in East Hull which he bequeathed as a rest home for poor gentlewomen after his death on May 9th 1930 his wife passed eight years before.
Thomas Ferens remains one of Hulls Famous adoptive sons. He helped establish Reckitt & sons as well as making many charitable donations to the city
The Ferens Art Gallery
The University of Hull
Ferensway (named in his honor 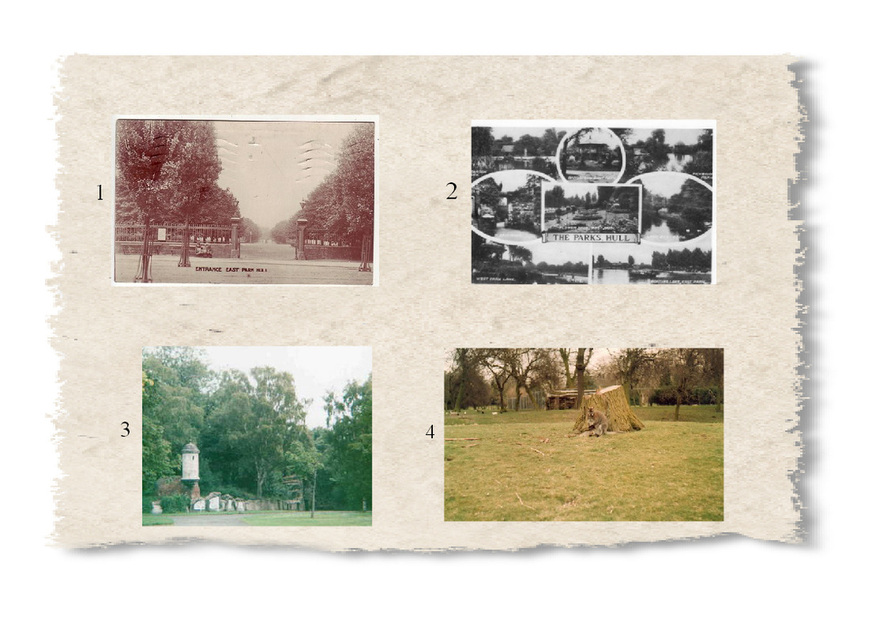